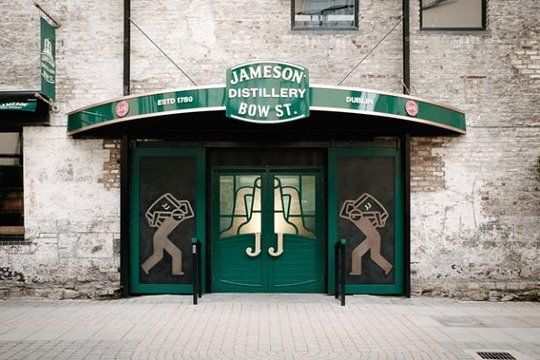 Jameson: The Heart of Smithfield

Oscars Smithfield Standing in the shadows of the Jameson Distillery Distillery

Down the meandering path of Bow Lane, directly across from
us at Oscars, lies the true soul of Irish Whiskey; the Jameson Distillery.
Probably one of the newest examples of a Celtic tradition, Jameson was made
what it is today through the work of a Scotsman, John Jameson, and generations
of Irish families.

Having developed a range of the highest end whiskeys the
world has to offer, its no accident that in 2017, 70% of the whiskey market in
the United States was Jameson produced to the highest quality standards.

The tour is fantastic; informative, mighty craic, and they
throw in a few tasters for good measure, leaving you to leave with a warmth, a
proper Irish tradition in and of itself.

Want more? Follow the lane to the cobbled square, and cross
the stone path to Oscars, where you’ll find the three essentials; quality food
(soakage), more Jameson (well now..) and the opportunity to give the
competition a chance (you can’t claim it’s the best until you know for sure!).
We’ll even throw in some free tap water to keep you hydrated.

Strictly necessary cookies
These cookies are essential for visitors to be able to browse the website and use its features. None of this information can be used to identify visitors as all data is anonymized.

Currency
Purpose: To be able to show prices in the currency matching the visitor's preferences.
Duration: 30 days.

Google Recaptcha
Purpose: To be able to validate whether the visitor is human and to limit the amount of spam from contact forms.
Duration: 1 year.
Provider: Google.


Third-party cookies
These cookies collect information about how visitors use the website, like which pages they've visited and which links they've clicked on. None of this information can be used to identify visitors as all data is anonymized.

ga
Purpose: Registers a unique ID that is used to generate statistical data on how the visitor uses the website.
Duration: 1 year.
Provider: Google.

gid
Purpose: Registers a unique ID that is used to generate statistical data on how the visitor uses the website.
Duration: 24 hours.
Provider: Google.

We also integrate with social platforms on this site that allow you to connect with your social network in various ways. Social media integration will set cookies through the website which may be used to enhance your profile on social media sites or contribute to the data they hold for various purposes outlined in their respective privacy policies.